The Impellers - As Sampled By (Final LP!)

The Impellers - As Sampled By

So my old mates The Impellers are hanging up their collective boots, at least as The Impellers. I'm sure we haven't heard the last of them individually, but the band have put together a fine, final folio of funk.
Doing what they do best as a live act, they've brought the funk to a well-chosen array of funk and soul as sampled by the creme de la creme of Hip-Hop and Beats, performed live and consecutively, in the style of a DJ mix. As if the LP title didn't give that away.

Farewell, The Impellers, it's been a blast!

Here's what they have to say about it all:

At long last, here's the 2 x 180g vinyl edition of the final album by The Impellers.


With exclusive hand-drawn art from Jamie Groovement and design by Rob Crespo, we're really excited about how good this record looks. And it sounds pretty decent too. 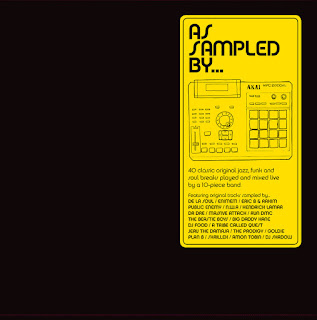 44 classic breaks, as sampled by the pioneers of hip hop and drum n bass, played and mixed live by a 12 piece powerhouse heavy funk band.

Played live, but mixed as if by a DJ, this album features versions of breaks sampled by the likes of De La Soul, Eminem, Dre, Eric B & Rakim, Public Enemy, N.W.A, Kendrick, Run DMC, The Beasties, J5, Big Daddy Kane, ATCQ, The Prodigy, DJ Shadow and Goldie (and just about every DnB producer that ever lived).

Heavy funk, soul and breaks band The Impellers have been killing dancefloors across Europe with this material for the past 5 years but now you can check it for yourself on record for the first time.

***SPECIAL OFFER***
The first 50 copies sold will come with a free vinyl copy of The Impellers' 3rd album, My Certainty

As Sampled By - credits: