“Greetings. My name is Mr Teatime. I am contacting you from the year 2074. The World is now a very different place. After the bomb dropped the robots took control. Please heed my warning.
I am so alone.” Back in the days of yore, releases like this would have got a short run vinyl pressing, and, having achieved cult status 30 years on, original copies would fetch ludicrous sums, leading to a Record Store Day repress. This is 2015, though, and precious few labels can afford the risk of pressing to wax, even when the output deserves it. 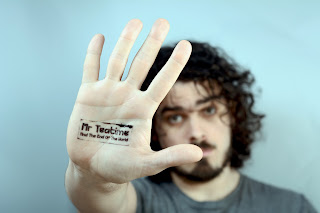 The Scribes Mr Teatime and the end of the World is a staggeringly original work from my long time buddies. (Yes, I'm blogging things my mates have done. Fuck you, get your own blog!)
I've been lucky enough to share the stage with them on many occasions, filling in as scratch DJ and occasionally performing the tracks Shaun and I wrote for my last album (plug). Must be at least 7 years' of shows, on and off. In that time I've seen them develop immensely. They have always had a ridiculously infectious stage presence - something which has actively alienated them from the UK Hip-Hop scene at times, because, you know, you're meant to shuffle about like a paranoid recluse - but over the years their finished product has become ever more polished.
They've earned a rep for being 'the kind of hip-hop you'd like if you liked indie most of the time', which has opened up doors to less traditional audiences. That rep sounds like a back-handed compliment, and to hip-hop purists, it is... but it's really served them well, and given them the courage to push boundaries in terms of sound and lyrical content. There's always been a kind of mawkish malevolence about the lyrics and delivery, without ever going full-Necro, which marries nicely to bouncy beats that encourage dancing and a range of lyrical topics from monstrous fantasies to positive affirmations about the inherent beauty of life. 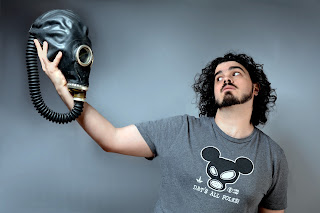 This release is, I suggest, a line in the sand. The same malevolence flows through each track, but gone is the almost histrionic delivery, replaced with a brooding, battle-scarred baritone... a grown up sound for a messed up world. It's basically Utopia: The Musical, or a 'hip-hopera' as the act have called it. In truth, concept albums don't always fare as well on record as they do on paper. This one fares better. The biggest triumph is that the sound wins over the concept. Crisp, deliberate beats punch through mechanical, retro basslines and glimmering, glitchy sound effects. It sounds like it comes from a dystopian future decimated by nuclear war, with only rudimentary tools and a battered MPC 2000 available to make music with. Which, when you've called your album Mr Teatime and the end of the World, must go down as a success. More than simply scoring a direct hit conceptually, the record's plaintive lament from 2074 has something to say to us in 2015... who hasn't watched the news over the last few years and not felt a creeping dread at the impending doom we seem to be accelerating towards?
This is the soundtrack to its aftermath. 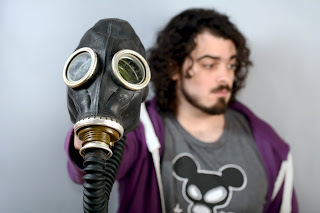 Check out the stark new video


And buy the EP digitally here

With a new album dropping in early 2016, it could be a big year for The Scribes!
Posted by Adam Hignell at 16:37