Ok, so it might be a bit of a stretch to call this either a 'Charity shop' find, or for that matter a 'gem', but this is a record of note one-the-less. Discovered in a box marked 'free records!' left outside a local pub, this was one of several fairly unbearable forays into drum 'n bass / dub-step territory left out upon the pavement, all of which are, on first listen, pretty bloody trite. This particular 12' however, has that peculiar charm wherein a not-very-good record thats played at the wrong speed, suddenly becomes quite-a-good record after all. Gone are the ADHD beats of the original, gone are the all too rhythmic wub-wubs - in their stead we are left with a jaunty, almost early-electro beat, and a pulsing, robotic bass-line straight from the bowels of some swing-less, impossible to program 80's sequencer. Everything about this record improves with a drop in speed - it's both heavier and less cheesy, it's timbres more delicate, less obviously constructed from a 'Massive' preset. I could be being hard on the original - its genre is so far from my cup of tea that its virtually Horlicks (does that work? Probably not). The fact remains however, that it is a far superior record with a nice bit of jaunt.

This is the moment where I would normally provide a link.. however such is the obscurity of this catch, that I can find literally nothing about it online - it's record label has closed down, the artist has a soundcloud page but has not uploaded any music to it, and the record is not held by a single online distributor in any form. In absence of any audio or visual addendums to the Logan Systems EP, I will leave you instead with the next best thing - a poster from the similarly epithetic Logans Run: 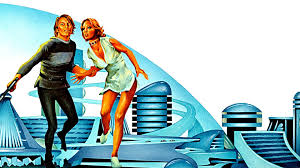 Posted by Daniel Alexander Hignell at 10:52